Skip to content
Home/Writing Tips/Twelve Lessons on Writing Fiction: The Essentials in Developing Your Novel (Part VII)
Previous Next 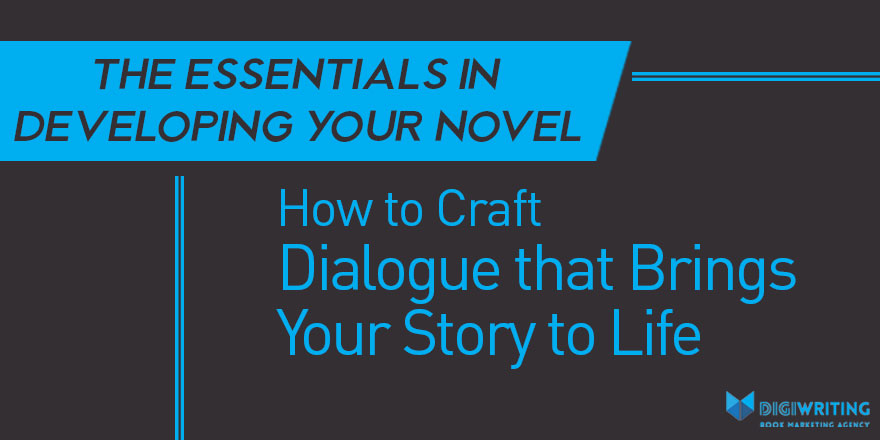 How to Craft Dialogue that Brings Your Story to Life

In part seven of this twelve-part blog series, founder of Books from Start to Finish Graham Schofield shares his thoughts on the dialogue in your story and how to “show” readers what is happening vs. simply telling them.

In part eight in the series, Graham will look at crafting backstory.

If you missed part six, Graham discussed how to write the “right” dialogue for your characters.

You’ve come up with a great plot, with fantastic characters that people will love, and now you want to bring it all to life on the page. How are you going to do that? How will you keep your readers turning the pages and not want to the put the book down? The answer is to make it all feel very real.

When we read, we form images in our heads, and the better that “visual stimulation” the more immersed we become in the story. Great characters we come to know and care for are vital, but so is showing the readers how they are behaving and feeling. If we show things to our readers they can see what is happening; if we only tell them, they can’t. It’s as simple as that.

Can The Camera See It?

If someone else has explained a theory perfectly, I always wonder why I should try and write something different myself. Author and editor Jeff Gerke offers the following advice  for showing and telling from his excellent book The First 50 Pages.

I’ll give you a little tool here that could revolutionize your understanding of showing and telling in fiction. I may not be the first person to talk about it in these terms, but I know I’ve never heard it before I thought it up. So at least I’m its co-inventor.

Urlandia was a peaceful realm. Peasants and nobles alike lived in harmony despite the occasional bout with famine or invaders from the neighboring kingdom of Dum. There were heroes and cads, pirates and tavern wenches, and in all, their lives were good.

Okay, aside from this being deadly dull, is it showing or telling? Let’s load up the testing gun and fire: Can the camera see it?

Your mind might have conjured up an image of a fantasy countryside with green meadows, vast forests, and castles with pennants flapping in the breeze, but how could you have seen “the occasional bouts with famine”? How could you see that their lives were good? You couldn’t. You weren’t shown any of this—you were simply told. And it probably left you feeling a little sleepy.

It would be quite possible to convert this telling to showing by depicting things before the camera’s lens that suggest each of these elements. But right now it’s unconverted telling.

I’ll leave you to think about how you might “show” that Urlandia scene and give you some different comparison examples. When explaining this show vs tell concept to writers, I like to use the term “evoking” and so does This Itch of Writing blogger Emma Darwin.

Her excellent post on this writing discipline is something I have shared with many people who I have coached or whose books I have edited. In that, she provides some excellent contrasting examples:

The temperature had fallen overnight and the heavy frost reflected the sun’s rays brightly.

The morning air was bitter ice in her nose and mouth, and dazzling frost lay on every bud and branch.

The taller man was a carpenter, complete with the tools of his trade.

A saw and hammer dangled from his belt and an adze was hooked into it, one thumbnail was black, and when he bowed she saw several long wood-shavings caught in his curly hair.

They stood close and wrapped their arms round each other in a passionate embrace, so that she became aware that he had been riding, and then that he was as nervous as she was.

They gripped each other and the tweed of his jacket was rough under her cheek. His hand came up to stroke her hair; she smelled leather and horses on the skin of his wrist. He was trembling.

I’ll close here with a great tip that almost forces you into writing showing and not just telling. You mustn’t use it too often, but consider this simple description:

When he heard the news, Frank looked very nervous.

Apart from using that terrible crutch word “very”–more on such evils in a later blog!–it’s pure telling. So let’s add some show and an “as if”:

When he heard the news, Frank licked his lips with a darting tongue and his eyes flitted madly, as if he was trying to watch flies.

Do you have a favourite piece of showing, perhaps something you’ve written or read? If so, please share some details below and tell us why you like that best. Alternatively, if there are other articles on the subject you’ve found helpful, we’d love to hear what that they are.