Twelve Lessons on Writing Fiction: The Essentials in Developing Your Novel (Part VI) 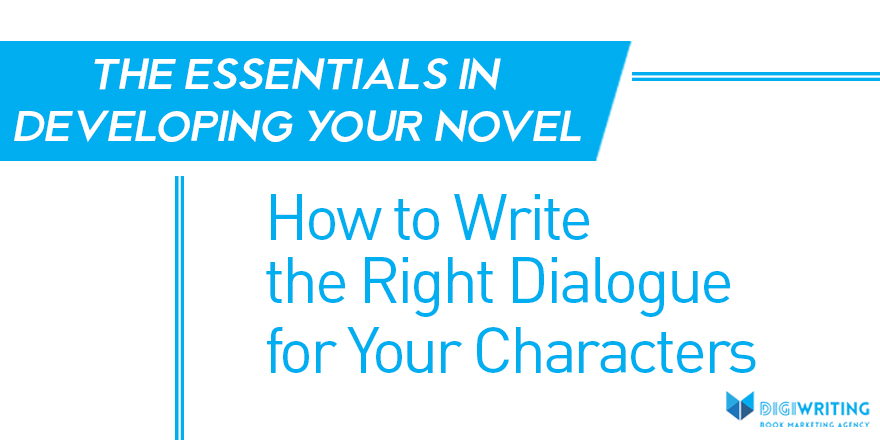 Writing the Right Dialogue for Your Characters

In part six of this twelve-part blog series, founder of Books from Start to Finish Graham Schofield shares his thoughts on the dialogue in your story.

In part seven of the series, Graham will look at Showing vs Telling.

If you missed part five, Graham discussed how to develop a great narrative in your story.

It’s Not Just About Speech

We have dialogue in our stories for lots of reasons, and it’s not just about adding realism and creating that ‘movie feel’ in readers’ heads. Dialogue is used to help portray and develop your characters, making them feel more real. It’s also vital in moving your story forward and revealing key elements in your plot.

Developing your story via narration is important, and your characters telling readers about the plot is even better, but beware of losing realism when you use dialogue to tell your backstory. I once read a husband and wife dialogue where they told each other how long they had been married and how many children they had!

One of the most effective ways to pick up how people speak is to listen to conversations in a bar or a train or a coffee shop. I don’t just mean what people say; it’s also how they look as they speak about different things or portray emotions. All of these aspects need to be conveyed in your writing.

Then there are the tags we add. Look at this piece:

“I really hate it when you do that,” she said angrily.

Is that okay for you? Actually it’s not good, because it’s much better to show feelings and emotions in the words spoken—which happens here—so the ‘angrily’ is superfluous. So is the use of words such as ‘yelled,’ ‘screeched,’ ‘wailed,’ and so on.

As much as we can still read words when they are misspelled, the use of quotation marks flips our brains into dialogue mode, and if all that is there is ‘said’ we probably won’t even read it, allowing us to focus on the conversation and not get distracted. The only words I’d recommend apart from ‘said’ are those such as ‘asked’ or ‘replied.’

You don’t need a dialogue tag after every bit of speech, and when you do need them to prevent your readers from becoming lost over who is saying what, just keep them as simple as possible and show your emotions in the narration and dialogue words used.

If, for the above example, you wanted to show more you could have:

“I really hate it when you do that,” she said as she clenched her fists.

Good dialogue won’t resemble speech exactly, because we often umm and err and repeat half sentences, and the need for your writing is to keep it short and simple. Yes, your dialogue needs to be realistic, but don’t have too much preamble and avoid stating the obvious.

For example, if someone arrives at a house or for a meeting, avoid the mundane and don’t quote all the greetings and “how are you?” things we say. Just narrate that like this:

Joe showed Matt into the kitchen, and they sat down at the table once they had coffee.

“So, did you get what I need this time?” asked Matt.

Good dialogue is sharp, short, and to the point, and it blends seamlessly, taking your story forward and developing the journey your characters have embarked upon. It is essential in making your writing a success, but remember, it’s not just about speech. I will leave the final words to Jerome Stern from his excellent book Making Shapely Fiction:

“Dialogue is not just quotation. It is grimaces, pauses, adjustments of blouse buttons, doodles on a napkin, and crossings of legs.”

Do you have a favourite piece of dialogue? If so, please share some details and tell us why you like it best. Alternatively, if there is a book where all dialogue is great, then we’d love to hear what that is.