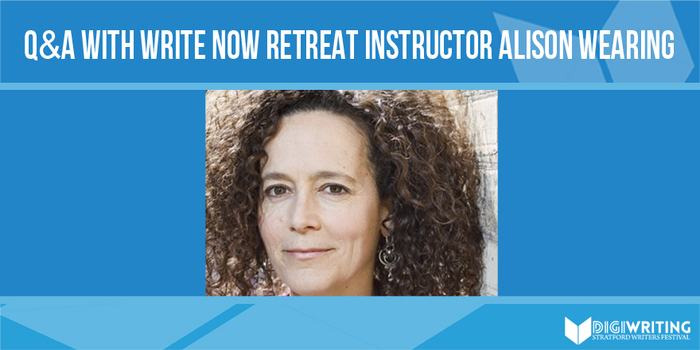 Our lives are woven together by fascinating stories, relationships, experiences, and revelations, but how do we transform those into something others would like to read? We’re excited to have talented instructor Alison Wearing leading the “Memoir Writing” Write Now Retreat over the course of three days. Read the Q&A with Alison below to learn more about the retreat and the process of writing a memoir.

You’ve written a number of memoirs. Why does this genre appeal to you?

My writing career began as a letter writing obsession. I left home at seventeen and began travelling in Europe, and in those days, the only mode of communication (aside from expensive long-distance telephone calls) was letter-writing, so in lonelier moments I would pour myself into that task, spending hours crafting long missives to friends and family. The letters were in the first person, of course, and were full of descriptions of my travels and experiences, so without realising or intending it, I was honing the craft of a memoirist. One such letter, which I wrote from post-revolutionary Czechoslovakia when I was twenty, ended up being published as an op-ed piece in the Globe & Mail. And that was the beginning.

What’s been the biggest challenge or hardship in your writing career that you’ve overcome?

There was a long period after my son was born when I simply couldn’t write. Anything. My mind felt like a white noise machine. I couldn’t even write in my journal. It wasn’t until my son was seven (yes, seven) that I began to be able to write seriously again and the first manuscript I produced was beyond awful. It was egregious. I stopped calling myself a writer; I was living as a singer by then, anyway. And then, one day in a bookstore in central Mexico, I was performing a piece in which I was threading vocals through a short text I had written and and doing some bizarre improv theatre with a local poet, and a man approached me after the performance and said he could see a one-woman show in what I was doing. I was flattered but thought he was bonkers. Which is a quality I’ve always liked in a person. A few months later, he (an actor/director from the UK) and I began working together on what became my first one-woman show. I’ve been writing and performing my own work ever since. It’s been one of the greatest joys and gifts of my life. (My son, now eighteen, is one of the others!)

I love hearing people’s stories! Human beings are endlessly fascinating. I just can’t believe what goes on in even the quietest, most unassuming life. Almost inevitably, in every workshop, there is someone who prefaces their work by saying, “Well, everyone else’s stories are much more interesting than mine… I don’t even know what I’m doing here… I don’t have anything to say…” and then they read a story that leaves us all gobsmacked.

What is something unique you bring to this class?

Humour. I can’t help it. It’s just part of who I am. It’s not that I cannot be serious (and indeed, many a memoir has an extremely serious story at its core, for the stories that shape us are often our most challenging), but I love to laugh. I believe we all do at heart.

If there is one piece of advice you give your students, what is it?

THINK SMALL. Because people have often lived full and fascinating lives by the time they sit down to write about them, the greatest challenge in writing a memoir is deciding what NOT to write about. In other words, how to narrow the focus of the story so that it holds together, has momentum, and becomes an exploration of a larger theme rather than a simple recounting of events. Rather than asking the question, “What happened?”, a memoirist must ask themselves, “Why does what happened matter?”

Alison Wearing is the author of the internationally acclaimed travel memoir Honeymoon in Purdah: an Iranian Journey, in addition to prize-winning articles, essays, short stories, and solo plays. Her most recent work, Confessions of a Fairy’s Daughter, is both a memoir and a one-woman play. The memoir was nominated for the RBC Taylor Prize for Non-Fiction, shortlisted for the Edna Staebler Award for Creative Nonfiction, named one of Indigo’s Top 50 Books of 2013, and became a national bestseller. The play has won numerous awards, including Best Dramatic Script at New York City’s United Solo, the largest festival of solo theatre in the world. Alison performs, speaks, and teaches writing workshops at home, abroad, and online. She is based in Stratford, Ontario.

Have you ever considered writing a memoir?