I Am A Writer Series – Writing Tips From Author Rachael Richey 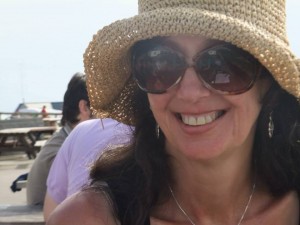 When I started writing Storm Rising, my main ambition was to make it of “publishable length.” To me that meant somewhere in the region of seventy to eighty thousand words, and I actually doubted my ability to write that much. When I passed seventy thousand with several chapters still to go, I was delighted, and when I passed ninety thousand and was still going strong, I realised I really shouldn’t be worrying about the word count at all. The book finally checked in at around one hundred and three thousand. It was then I realised the word count is academic.

Which do you find harder to write: the beginning or conclusion?

The beginning of the book is much harder to write. However much I know the story, know how it ought to begin, actually getting the right words down on the page is extremely difficult. The beginning is most important because it needs to “grab” your audience and make them want more, so getting the wording right is vital. By the time I get to the end of the story it more or less writes itself so the conclusion is far easier to write.

I’ve wanted to be a writer ever since I was about ten years old. Even before that I used to write little stories about my teddies and dolls. Between the ages of ten and fourteen, I wrote a whole series of stories about groups of girls having extremely unlikely adventures, and doing daring and dangerous things. Unfortunately as I grew up life got in the way and I only wrote intermittently over the next twenty years or so. When I finally remembered that writing really was my first love, I dived straight in and haven’t surfaced since.

When you begin to write, how do you get started? With an outline, character idea, title, theme, plot?

In most cases my stories have grown from a single idea. A short scene, a snippet of conversation, a location, or something of that nature. In some cases the orginal scene may not make it into the finished book, but it provided the inspiration for the story. A book I’m currently writing has grown from the one image of a girl standing alone on a wild, windswept beach. From that scene I deduced why she was there, who she was, why she was alone, what she was running away from, etc., and so the story was born.

I have a basic idea for the story, but in most cases that changes dramatically through the writing process. I will know for instance if two people will end up together, but I may not know quite how that will happen. As the characters grow and develop, they quite often take over and write the story for me, so sometimes the ending can come as a bit of a surprise. A nice surprise of course!

Rachael Richey lives in Cornwall with her husband and children. She writes Women’s Fiction, and Storm Rising, due for release on February 27th, 2015, is the first book in the “NightHawk” series. She has been writing since she was a child, starting with stories about her teddy bears and dolls. She lived in the Hebrides for nearly fourteen years, having originally gone there to work for the summer season. She met and married her husband David whilst there, and had two children, before moving to Cornwall at the end of 2000. There are currently four titles in the “NightHawk” series, the second of which is due for publication later this year.

Do you use an outline when you begin writing?