I Am A Writer Series – Writing Tips From Author Paul Ikin 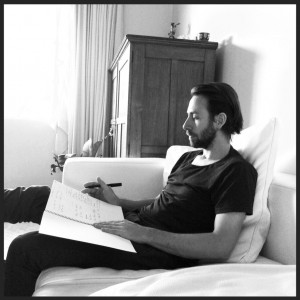 Have you self-published a book?

From the beginning, The Other Side of Eve was going to be a stand alone, self-published novel. Also as an illustrator and graphic designer, I felt I could write and create the novel I always wanted without restraints from publisher’s rules. I didn’t ignore them completely, but I could see I could push them, especially with page count, chapter illustrations and style, even the cover design. It was the ultimate art project.

Overall I found self-publishing a joy, but also one of the hardest things I’ve ever done. But I did do everything… but editing of course!

I didn’t think too much about word count, not until I had written way too much!

A typical novice error, so I am told.

But for me I didn’t want restraints with my first draft. I turned off all counters, editors, spelling notifiers, and just wrote. I wrote until I reached the end of that chapter, and until it was done—I just kept writing.

Looking back due to my obsessive typing I wasted a lot of time with editing, and many chapters had to be cut in half. So yes, next time I will pay more attention, but I’m glad I just went crazy for this novel.

Have you ever tried writing in a café? How did you find the experience?

After writing the first draft of Eve, I traveled from Melbourne to Berlin, to live for six months. It was there I would write the second/third draft and begin to refine the chapter illustrations. I found several cafes that I would alternate between, and it was here I could be left alone to write amongst people, ponder, and drink lots of coffee. I also met other writers at these cafes and I didn’t feel as isolated, when you can feel so alone in a foreign city.

Writing is so powerful and direct as it taps straight into your imagination and retrieves data as if plugging straight into a dream. Yet, a fantasy like The Other Side of Eve becomes more than a dream after even a chapter. Characters are born and remain, until like here in reality, they die; their quirks and fancies, what they’ve done and how they feel are all so very real and in an instant you can tap into that.

Writer’s block has never come to me as my characters were very much alive and dare I say it—real.

How do you develop book cover ideas?

As an illustrator and graphic designer, I like strong, minimal covers. The unforgettable ones are usually the simplest designs. The Other Side of Eve went through 15-20 covers, but I seemed to return to the original design. In the end, I refined it, and it is the cover you see today.

Developing starts at the research stage, and you find out what others in your genre are producing. I realised most MG fantasies were colourful; characters were blasting magic and titles were in your face… so I went in the opposite direction and made it simple, quirky, dark, and ominous, just like Eve.

In his book, The Other Side of Eve, Paul Ikin approaches the subconscious habits and anxious thought processing mind, as he and others have endured, in an abstract fantasy that follows the lives of two troubled teenagers. Intertwined chapters follow the anxious Evelin Boots and the housebound Belleny Vera as they struggle to find peace and tranquillity within their own minds, let alone their own worlds.

As a qualified illustrator, Ikin lets his creative mind free in Belleny’s world of Mare-Marie, and from experience he brings an abstract reality that we can all assimilate to, if only in our dreams. Ikin has had the opportunity to not only write but draw over eighty chapter illustrations that show us a glimpse of his own vision of The Other Side of Eve, and its weird and wonderful characters.

Ikin is a current member of Writer’s Victoria and spends a great deal of time creating art & concepting narratives within the cosy confines of his Melbourne City art studio. As an emerging author, his fervent first novel is quite an achievement.