Getting to Know Your #CanLitPit Publishers: Thistledown Press 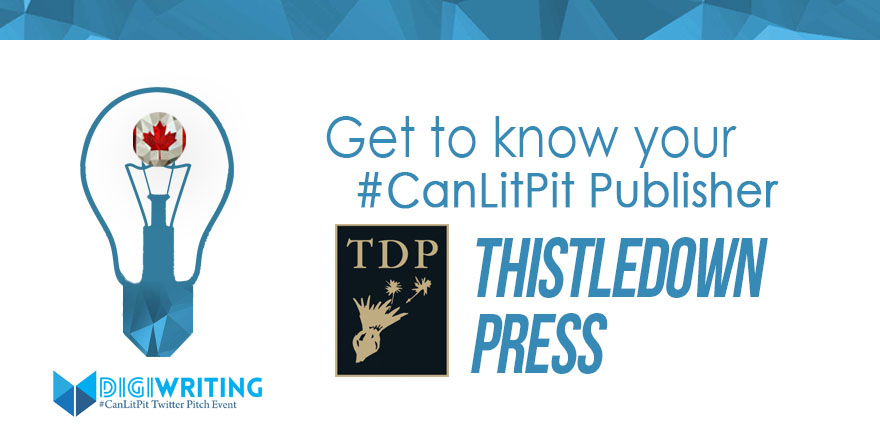 Before #CanLitPit on Wednesday, August 10, 2016, learn more about Thistledown Press!

Thistledown Press was founded in Saskatoon, Saskatchewan in 1975 to publish and promote the writing of both new and established prairie writers. It was one of a number of Canadian publishers who developed publishing programs in the mid-1970s as a response to a proliferation of quality poetry and fiction being written by Canadian writers, especially young writers, throughout the western provinces of Canada. Thistledown’s early programs consisted entirely of poetry; however, by the time it had joined the Literary Press Group in the early 1980s, its list had expanded to include fiction and poetry by writers beyond the prairies.

The founders of the press were Glen Sorestad, a poet, teacher, and editor whose first three books were published by the press, and Neil Wagner, a teacher and prairie artist who designed Thistledown’s books in the first seven years before his departure. Glen and his wife Sonia continued working with Thistledown in various capacities as majority shareholders until their retirement in 2000. While the press had many people associated with it in its formative years, two new partners, Al Forrie and Paddy O’Rourke, who came into the press in 1980, had the most lasting effect on building the press into a national forum. They remained as partners after the Sorestads retired until 2004 when Al Forrie bought out all shares in the press to become its sole owner. Jackie Forrie, Al’s sister who became office manager in 1994, remains with the press as well.

Connect with Thistledown by following them at @ReadThistledown

What Thistledown Press will be Looking for During #CanLitPit:

According to Thistledown Press, what makes a great pitch?

A demonstration that the author is established in the writing community in Canada, ideally has been published in literary magazines, recognizes the work that goes into the publishing process, and is committed to marketing themselves alongside their publisher to promote their book, especially by keeping themselves well-informed on the dedication that is expected of them.

Have you read any books from Thistledown Press? If so, what is your favourite?