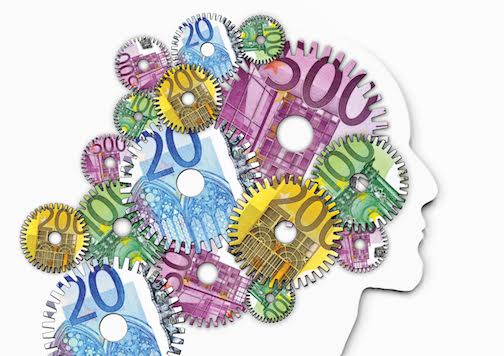 The most relevant and meaningful writing is drawn from personal experience. If you have lived that experience, you are an immediate expert, not an outsider looking in. In this column I highlight the works of three writers who worked minimum wage jobs—two in simulated situations and one out of necessity—whose experiences invite readers to vicariously enter the world of poverty, and explain the strategies that they used to result in effective writing.

The American Way of Living and Working in Poverty

On January 1 of this year, 20 American states raised their minimum wages. In Florida, where 27-year-old Roderick Livingston works 25 hours a week at a Taco Bell, the minimum wage went up 12 cents—from $7.93 to $8.05.  He sleeps in his ’87 Cadillac, which doesn’t run, and takes the bus to work. “The work that we do,” he told the Washington Post, “it’s modern-day slavery. We’re not being compensated for the work we put in. Minimum wage, as it is now, is not a living wage.”

In Losing Our Way: An Intimate Portrait of Troubled America (2014), Bob Herbert writes that while the 2008-2010 global recession was “unkind” to middle class Americans, it “was positively brutal to the working class and poor.” (p. 1) The United States that was once a place of “widely shared prosperity and limitless optimism” has “gone astray,” and many people are understandably demoralized. (pp. 1-2)

Today more than 45 million Americans live in poverty and many of them earn minimum wage or below.  How they survive day to day is beyond the imagination of most of us, but three authors provide fascinating, if not depressing, insight into what it is like.

Nickel and Dimed: On (Not) Getting By in America

From 1998 to 2000 Barbara Ehrenreich, acting as an undercover journalist, worked several minimum wage (or below) jobs over a two-year period and attempted to live on the wages she earned. Her revealing experiences were recounted in her bestselling Nickel and Dimed: On (Not) Getting By in America (2001). 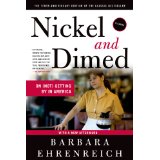 Ehrenreich worked six minimum wage (or below) jobs—waitress, hotel maid, house cleaner, nursing home aide, and Wal-Mart associate—in three states while doing the research for Nickel and Dimed in the late 1990s at a time when the American economy was prospering.  But the minimum wage workers with whom Ehrenreich associated were not prospering.  Many of them worked two jobs, lived in cheap motels (or their cars) because they could not afford costly rent deposits, tried to ignore illnesses and injuries because they did not get sick pay and could not afford health care, and ate unhealthy foods on the run. They endured monotonous tasks, long hours, time pressure, repressive policies, lack of recognition, loss of civil rights, and loss of dignity and self-worth. Despite their hard work, many of these people found themselves “sinking ever deeper into poverty and debt” because the cost of basic housing, food, and transportation exceeded their income.  Ehrenreich found that most of her co-workers accepted their fate with “passive resignation”—too tired and defeated to envision a better life.

Ehrenreich’s wrote her remembrances of each workday in whatever hovel she found herself lodged at night. Her vivid descriptions (for example, she meets her first manager as he’s yelling profanities because a cook forgot to thaw the steaks, and her training is provided by another waitress who reassures her “that’s just Billy” and later confides that she lives in her truck and showers in a nearby motel) make us feel like we’re right there, earning $2.43 per hour plus tips with Ehrenreich. We’re with her on the restaurant floor, sharing her anxiety as a new waitress who is “beset by requests as if by bees: more iced tea here, catsup over there, a to-go box for table 14, and where are the high chairs, anyway?” We’re with her when she awakes at 4 A.M. in a cold sweat, “thinking of the table where I screwed up the order and one of the kids didn’t get his kiddie meal until the rest of the family had moved on to their Key lime pies.” (pp. 14 – 17)

Working In The Shadows: A Year of Doing the Jobs (Most) Americans Won’t Do

Ten years later Gabriel Thompson spent a year as an undercover journalist, this time working three minimum wage jobs side-by-side with mostly immigrants to gain insight into “doing jobs most Americans won’t do.”  His Working in the Shadows: A Year of Doing the Jobs (Most) Americans Won’t Do was published in 2010. 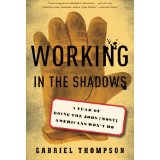 Thompson went undercover to work with mostly Latino immigrants who do “punishing work at poverty wages” with very few benefits.  He labored beneath the scorching sun in the lettuce fields of Yuma AZ, inside a poultry plant with “all the charm of a large cement box” in Russellville, AK, and behind the scenes in a restaurant in his hometown of New York, NY. The work in each location was physically arduous and mentally monotonous, leaving little energy to live life beyond working, eating, and sleeping. The poultry processing plant environment was the worst working environment, and immigrants were invariably assigned the worst-of-the-worst tasks. Standing on an assembly line hour after hour with the task of manually splitting apart frozen chicken breasts, Thompson confides that it was not his freezing fingers or burning biceps that were the most difficult part of the job. It was the “mindlessness” that made it so difficult, which Thompson compares to working simple problems in a giant arithmetic workbook over and over and over.

It’s easy to feel outrage when you read any of these three books that shine a spotlight on the way we as a country seem indifferently content to allow people to work for wages that will not support their basic needs. But Thompson’s dissatisfaction with the labor inequities he investigates is balanced by the surprising “worker solidary” he discovers. Unlike the disgruntled employees with whom Ehrenreich and Tirado associate, Thompson’s mostly Latino immigrant coworkers complain little about their harsh working conditions and low pay (jobs in their home countries pay even less). They help and encourage one another while they share food, stories, and jokes. Although Thompson’s book is an expose of an industry that clearly exploits immigrant workers, it also stands as a tribute to the camaraderie that sustains the spirit of those who labor “in the shadows.”

Most recently Linda Tirado wrote a blisteringly frank and unapologetic blog post in response to the “sneering” question: “Why do poor people do things that seem so self-destructive?”  Her impromptu essay, ”Why I Make Terrible Decisions, or, Poverty Thoughts,” went viral with the speed of lightning and was reprinted in the Huffington Post, the Nation, and Forbes. It soon evolved into her sarcastic, witty, and unflinchingly honest account of what it’s like to live in poverty:  Hand to Mouth: Living in Bootstrap America (2014). Unlike Ehrenreich and Thompson, who chose to temporarily sacrifice their comfortable lifestyles to write about poverty, Tirado was writing about life as she knows it. 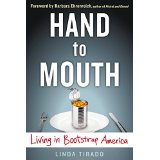 In her candid and unapologetic explanation for why she and other poor people do what they do, Linda Tirado has written a caustically witty and persuasive firsthand account of what it looks and smells and tastes and feels like to be living in poverty in Hand to Mouth. A series of admittedly poor choices and some “seriously bad luck” precipitated a downward spiral that left Tirado scrambling to keep her family afloat. By working a series of “soul-killing” low-paying jobs to “try to get back to the starting line,” Tirado has lived the life that Ehrenreich and Thompson briefly sampled. She has also experienced firsthand the demoralizing end morale-deflating injustices and indignities they observed in low-wage workplaces. “I’ve rarely had a boss who gave me any indication that he valued me more highly than my uniform,” she writes, “we were that interchangeable.” While many people have the “luxury of asking themselves whether a job fulfils their career hopes and ambitions,” Tirado’s personal metric involves whether or not she has to ask a manager’s permission to use the bathroom (her research has shown that breaks are at the discretion of employers and many of them apparently don’t use a lot of discretion). (p. 18)

Tirado’s writing is fascinating because she defies the stereotype of minimum wage workers. She is witty, bright, and well read.  The monotony of her jobs is stultifying because her big brain needs more challenge. She readily admits that some of her own shortcomings and bad decisions have kept her living in poverty, but she never resorts to self-pity.  Her brazen candor about her experiences and bold criticisms of a country that allows people to live as she does will quickly make a raise-the-minimum-wage believer out of you (although I already was one). When Tirado writes that we need more respect for the people who clean toilets, you believe her.

Writing from personal experience—whether it is your own life (Tirado) or a simulated one (Ehrenreich and Thompson)—is powerful.  All three of these writers integrated research with personal narrative in their writings, but it is their experiences (Ehrenreich’s description of Wal-mart’s degrading “time theft” employees policies, Thompson’s frozen fingers on the poultry line, Tirado’s expanding shoe size as her feet swelled during 10-hour work shift on her feet) that stay with us and convince us that they do indeed know their stuff.  Reading these very personal accounts, we can easily relate and empathize with them.  When firsthand accounts aren’t feasible, interviewing individuals and writing their stories can also be effective. But nothing adds validity more than actual experience.

Additionally, these writers’ narratives are effective because they have the following qualities:

These writers integrate experience with research:

Without factual information to support their experiences, these narratives would not be nearly as convincing or credible. But the blending of the fact and experience in a seamless way, as these writers do (Ehrenreich even includes additional information in footnotes), strengthens their underlying position that minimum wage living is an injustice.

These writer are skillful observers:

Although Ehrenreich and Thompson did not have the opportunity to take notes as they continually urinated in pee cups for drug tests, picked lettuce in the sun, and cleaned homes of the wealthy while toting backpack vacuum cleaners, each took mental notes during their shifts and documented their observations daily at the end of exhausting days. It is their remembrance of details that makes their experiences disturbingly fascinating.

Ehrenreich and Thompson worked beside people in their simulated experiences with whom they would not normally work or socialize. But in their common loathing of the monotonous tasks they performed and often degrading ways in which they were treated, both Ehrenreich and Thompson developed a camaraderie with their coworkers. The empathy they developed for their coworkers’ lack of quality of life makes their stories even more compelling.

These writers have an agenda:

As these writers sat down to write, they had an agenda in mind that went beyond raising awareness about poverty. They want to see changes made that range from the personal way we treat service workers to national policy. Each writer offers concrete suggestions for possible solutions to address the pervasive problem of poverty. Because these recommendations are based on solid research as well as personal experience, they have a greater impact on us than “textbook solutions” that have no human face.

Have you ever drawn upon personal experience in your own writing?