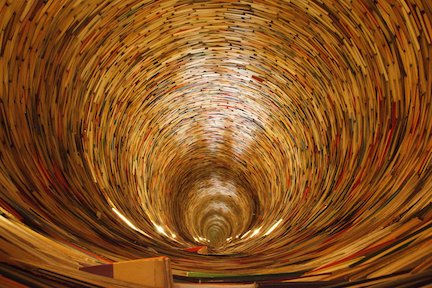 In his wonderful essay “The Ambition of the Short Story,” Steven Millhauser writes that here in America where size equals power, ”the novel is the Wal-Mart, the Incredible Hulk, the jumbo jet of literature.” The short story, mindful of its place, stays quiet and out of the way. While the mighty novel continually takes on the impossible task of embracing everything in the world, the short story, Millhauser writes, instead concentrates on a grain of sand “in the fierce belief that there — right there, in the palm of its hand — lies the universe.”   And therein lies the greatness of the short story:

Its littleness is the agency of its power. The ponderous mass of the novel strikes it as the laughable image of weakness. The short story apologizes for nothing. It exults in its shortness. It wants to be shorter still. It wants to be a single word. If it could find that word, if it could utter that syllable, the entire universe would blaze up out of it with a roar. That is the outrageous ambition of the short story, that is its deepest faith, that is the greatness of its smallness.

Ever since I discovered—and quickly devoured—Flannery O’Connor’s short stories while I was a college student during the 1970s, I have been an avid short story reader. Having read many stories over the years—and studied how they are crafted—I have a deep respect for the genre and the writers who care about its survival passionately enough to keep spinning tales, despite its distant popularity compared to the novel. Writing short stories is indeed a labor of love which attracts only a small following (although we are a very devoted minority) and limited monetary compensation.

The short story is “one of the greatest, most challenging, most infuriating forms of literature,” writes Irish novelist and short story writer Joseph O’Connor. Great writers—similar to Elton John playing the piano or Tiger Woods swinging a golf club—make writing short stories look easy. Great stories, says O’Connor, “don’t read like they were written. They read like they simply grew on the page…… But anyone who has attempted to write short stories will tell you they don’t simply grow on the page. Writing short stories requires a lot of work, British writer Claire Wigfall points out.   “A lot of practise. Numerous failed attempts. A huge amount of struggle.”

In revisiting the works of some of my favorite short story writers—Jumpha Lahari, Flannery O’Connor, Rick Bass, Ron Rash, Sherman Alexie, and Tim O’Brien, among others—and how they write—I have identified these 15 qualities as the most important ones I believe that great short story writers share.

In this 15-part series, I will explore one quality each week that makes short story writers great.

Susanne Carter is an avid reader with a special interest in the short story genre. Susanne is a semi-retired, freelance writer, editor, and researcher who lives in Dunedin, FL. Susanne is an active volunteer in literacy, dog rescue, and dog therapy activities. Her blog, Short Story Insights, offers reviews, information, insights, and resources on short stories.

Which quality are you most interested in hearing more about?