Social Media for Authors: The Best Times to Post 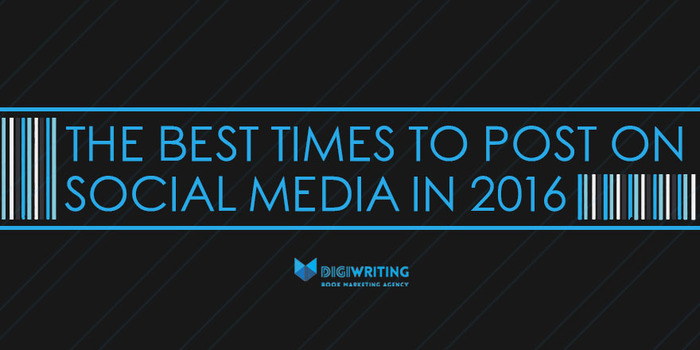 The Best Times to Post on Social Media in 2016

With organic reach dropping and social media becoming busier than ever before, it’s important that authors and publishers know the best times to post to social media. With limited opportunities and time to reach their intended audiences, knowing when to post can make a big difference in terms of engagement, and perhaps even book sales.

In 2014, we posted a similar blog that reviewed the best times to post on Facebook, Twitter, Pinterest, and Google +. With Google + undergoing a massive re-branding in late 2015, Google + is now very different from its original inception. Also, since 2014 Instagram has experienced massive growth, with more authors and publishers using it than ever before, so we have included it over Google +.

Remember that there is no right time to post to social media. The numbers presented below are a generalization intended to help you plan your posts. As an author or a publisher, you always need to factor in elements such as:

As of publication, Facebook has 1.79 billion users worldwide, making it the largest social network. Today, most people are on Facebook, and it is quickly growing in popularity with older demographics (is your mom on Facebook yet?).

People use Facebook at home and at work on both desktop and mobile devices.

As of publication, Instagram has 500 million users worldwide making it the second largest social network. Instagram’s user base has quickly grown due to its integration with Facebook and the fact that it’s relatively easy to use and post to.

Instagram is meant for use on mobile devices, so users tend to use the network every day, all the time. Thus, you can post to Instagram at any time, but you’ll want to avoid posting during this time as engagement rates tend to be the lowest:

As of publication, Twitter has 371 million users worldwide. This number is lower than some may expect, as older demographics tend to avoid Twitter and favour Facebook instead.

Twitter is used at work and at home, with most people using it during downtime or their commute.

As of publication, Pinterest has 100 million users worldwide and these largely skew female (80-90%). Pinterest has a focus on lifestyle products and topics, and experienced tremendous growth over the past 2 years.

Do you find a specific time works well for any of the social networks featured above?