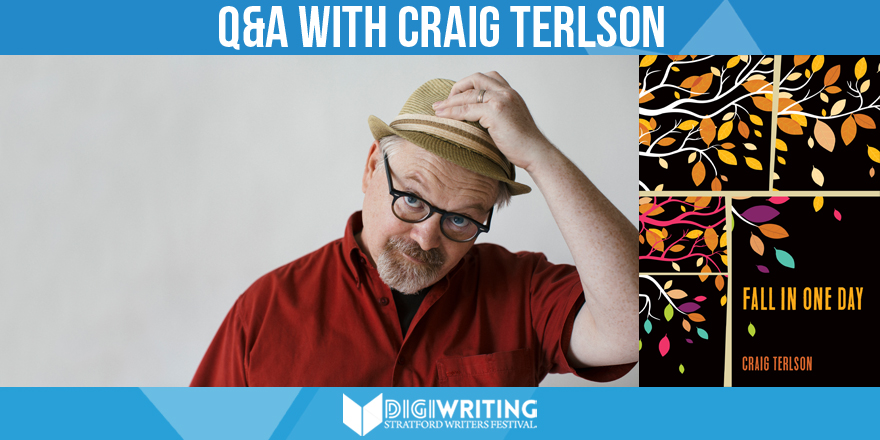 From October 20—22, 2017, the Stratford Writers Festival will take over Stratford, Ontario, as some of Canada’s top literary and creative talents come together for this unique three-day festival. With the festival rapidly approaching, we caught up with attending author Craig Terlson to ask him a few questions about his latest projects, and why literary festivals are important to the Canadian artistic community.

To hear more from Craig, click here to purchase tickets to his upcoming Stratford Writers Festival panel Past, Present, and Uncertain Future with Ron Sexsmith and Terry Fallis.

Your new novel, Fall in One Day, occurs around the time of Watergate. What is it about the period that fascinates you?

The 70’s was an era of paranoia, and movies from that time captured the sense that certain truths were being hidden from the public. Watergate, in 1973, played a large part in creating that fear. This wasn’t the first time that politicians had lied, but this time they were caught, and then put on international TV. Movies like 3 Days of the Condor, The Parallax View, and of course, All the President’s Men inspired me to create my own story of a young boy trying to find out the truth about his missing friend. It also helped that the 70’s produced some of the best songs of the 20th century, which provided a killer soundtrack to the narrative.

At the Stratford Writers Festival, you’ll be leading the social media workshop. In your opinion, what is the #1 rule for writers to follow when using any platform?

The number one rule is: Be a person. When writers get involved in social media they sometimes forget about the word “social.” A lot of mistakes are made when writers are eager (or desperate) to get their work out there to be known, and to sell a whack of books. It really doesn’t work that way now… and I don’t think it ever did. Platforms like Twitter are best used as connection points with other writers, agents, and publishers. There are best practices of how to make the connections, and all of them revolve around this “be a person” rule. If every second or third tweet is asking someone to buy your book, you are doing more harm than good to your brand. And yep, writers have a brand.

Why do you feel it’s important to meet readers at events such as the Stratford Writers Festival?

So I can tell them in person to buy my book. (Kidding!) I’ve always been a voracious reader—it’s the thing that made me want to write books. My theory is that if you read enough books, eventually you are going to want to write one. People who know me know that my favourite lunch or coffee question is, “What are you reading?” For sure, I love to talk about my own work, but I am just as fascinated to hear what other books people are reading. (For instance, has anyone read the new Jennifer Egan? I absolutely love her work.) Hearing from other readers inspires me in my own writing.

Again, it is about connecting with people who love literature, and are interested in the craft of writing. Over the years, I’ve developed quite an addiction to books on craft, from Stephen King to John Gardner and everyone in between. I go to festivals to listen to other writers talk about their craft, and hear their inspirations and struggles within the very long chess game that is writing a novel.

Are you working on any projects right now?

I have a few projects at different stages—I am admittedly a genre-jumper. On the backburner is a time travel novella called Bent Highway that I plan on extending, and the beginnings of a novel about samurai in 1980s Toronto. Yes, I said samurai. My main focus is my new crime-fiction novel, which takes place in Upper Michigan in a town called Manistique. I am a huge fan of crime writers like James Lee Burke, who elevate the genre with beautiful characterization and rich prose. I am hoping that my character, Luke Fischer, can carry a series of novels as well as Burke’s Dave Robicheaux.

To hear more, don’t miss Craig’s panel entitled Past, Present, and Uncertain Future on Sunday, October 22, at 3:30 pm at the Stratford Writers Festival. See you there!