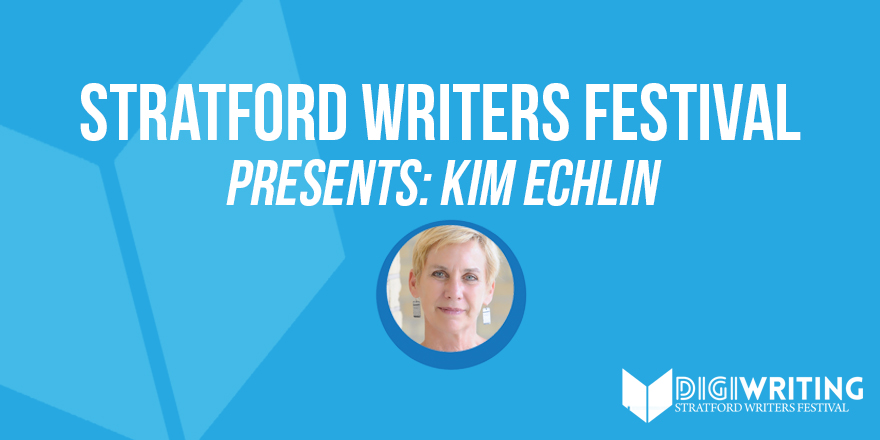 We’re thrilled to have Giller Prize nominee Kim Echlin joining our festival on October 23, 2016. Echlin is the author of Elephant Winter, Dagmar’s Daughter, and Inanna: From the Myths of Ancient Sumer. Her third novel, The Disappeared, was nominated for the Scotiabank Giller Prize and won the Barnes & Noble Discover Great New Writers Award for Fiction.

When to see Kim Echlin at the Stratford Writers Festival

On October 23rd, from 11 a.m to 1 p.m, you can enjoy a two-course brunch upstairs at the Revival House while listening to a reading by Giller Prize nominee Kim Echlin. Echlin fuses music and literature in her latest book, Under the Visible Life, and she will perform this reading with a jazz pianist.

Reflections on Library Life for the Stratford Public Library

If you can’t wait until the Stratford Writers Festival to hear from Kim Echlin, check out her thoughts on the vital importance of libraries in this very special guest blog post:

Mark how one string, sweet husband to another,
Strikes each in each by mutual ordering;
Resembling sire and child and happy mother,
Who, all in one, one pleasing note do sing.
–William Shakespeare, Sonnet 8

I grew up using a tiny one-room suburban library in a shopping plaza where I first discovered C.S. Lewis’ The Lion, The Witch and the Wardrobe by simply pulling the book off a shelf. I remember the uncanny feeling of being in a great writer’s world, and the pleasure of having discovered this by chance, all by myself. In that small room, I took books from shelves. I loved stories and I was beginning to look for great writing. I still did not know why some writers were great but I could sense when they were.

I remember the smell of the books and the plain tables and how quiet we had to be. There was something sacred about being in a library. My grandfather whom I loved, lived far away in the ‘big city,’ and he always spent a lot of time in libraries. He sometimes described these places to me in his weekly letters, and I imagined them as exotic and many-roomed, with separate places for children, with mandala-like mazes of dictionaries and encyclopedia and maps. From these libraries he wrote letters to me and one day he asked me to write him one back.

I didn’t know what to write about. I didn’t have very many words. When I told him I didn’t know what to write, he asked me to describe breakfast at my house. This was a beginning. The very next breakfast took on new contours and shades. There were relationships to consider. My mother standing. My older brother rushing. My father had porridge, every day. There were things people said. There was taste and colour and moods that changed. My grandfather was showing me how to see that my world—which I had thought unremarkable—was extraordinary. And he genuinely wanted to know about breakfast at my house. I knew that too.

He wrote stories for me about a girl who was my age, Terry, and her dog Bingo, which he illustrated with watercolour pictures. Terry had many adventures, strangely similar to mine. She watched a baby brother come into her home, and got a good dress dirty, and had her first day of kindergarten. She was nearly always on her own with Bingo. Adults were elusive presences, far from the real dramas of life. Learning to read the words of my Terry and Bingo stories was woven into the rhythms of my childhood. Time passed and my grandfather mailed me a small red dictionary called Highroads’ Dictionary: Pronouncing and Etymological, New Canadian Edition. The preface assured me that the work was “intended for the use of young people” but when I objected that if I couldn’t spell, how could I look up a word, my grandfather said, “Start with the first letter.” He encouraged me to keep trying, and to observe well.

Years later, long after he died, I wanted to visit the library that my grandfather had frequented. It was called “The Boys and Girls House” and with an odd pleasure I learned that it was the first separate children’s library in the British Commonwealth, built north of the old Central Library. I learned that one of his stories was mimeographed and distributed by the librarians. The original building was gone by the time I began to look for it, and the new building was named for Lillian H. Smith who was recruited to Canada in 1912 to create the library’s first “children’s department.”

Much is gone from my grandfather’s world. He never flew in an airplane. He never touched a computer. He marvelled at the first moon landing and worried that the romance of the moon might diminish. What might he have thought of print replaced by pixels? His library is gone and he is gone, but the stories of Terry and Bingo endure.

I imagine my grandfather walking the streets of the ‘big city’ where I walk now. I remember my father’s stories of sitting outside on the porch on hot summer evenings with him, reading aloud to each other the works of Charles Dickens. I imagine my grandfather showing me his signed paper library card from his wallet. The insides of our library books had loan cards that slipped into small envelops and were hand-stamped by the librarian with an ink date stamp.

I imagine him carrying in his pocket a fountain pen and going to his room to type up his stories on an Underwood typewriter that used a ribbon of ink. I remember him complaining about what a bad typist he was and that he corrected his errors by hand with his pen. I imagine how his reading helped him make meaning in a life that had not been easy, a life that had survived the Depression and war, a life that always engaged with the art, and found solace in the library.

Our imaginations create meaning. There really is nothing else. My discovery of this is one of my earliest memories as I think about visits to our one room suburban library, and reading and exchanging letters with my grandfather. I never worried about being alone. There were letters and stories. I never worried that there weren’t enough books. There was the library. In a library we could be who we most are, solitary creatures together.

Why are libraries important to you? What impact has a library made on your life?