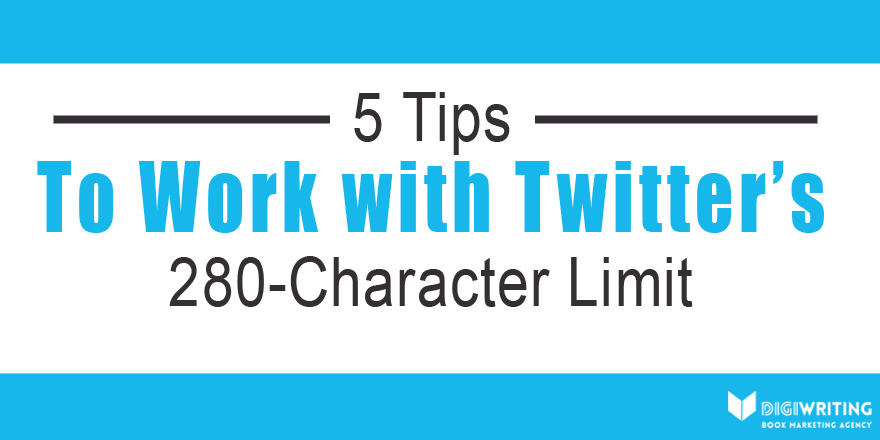 In early November, Twitter announced that it was increasing the traditional limit of 140-characters per tweet to 280 characters. The news was met with mixed reactions, with some arguing that what made Twitter so great was how quickly information could be consumed due to the character limit. Twitter stated that the increase in character limit was necessary to “attract new users and for growth.”

Whether or not you believe it was the right thing to do, authors and publishers now have an even bigger and better opportunity to use the social media platform. Below, our book marketing experts have provided you with 5 tips to work with Twitter’s 280-character limit:

Social media is all about building relationships. This should come as no surprise to any author or publisher who currently uses social media as part of their author platform. With an increase in character limit, you can now take your relationship with your followers to a new level through longer messages.

Just because Twitter has expanded their character limit, it does not mean you should start to post longer excerpts or quotes from your book. If you are going to post quotes or excepts, make them stand out and create a piece of content (i.e. an image) with them.

With people tweeting more and more text, now is a great time to update your Twitter strategy to include more content such as images and videos. This will help you stand out from the crowd and draw attention to you and your books.

4) Include Multiple Links in Your Tweets

You can do a lot with 280-characters, such as including multiple links in your tweet. For example, perhaps you have a new newsletter out, so you can link to that in your tweet. With proper spacing, you can also include the link to sign up for future newsletters and build your email list. Remember that proper spacing (i.e. another line) is required so the tweet appears clean and easy to follow.

To increase engagement, many Twitter users choose to tag other followers or accounts from which they are looking to receive engagement. With the expanded limit, authors and publishers can now tag more than ever before. For example, if you receive a great review in a major publication, you can tag the reviewer, the publication, and some of your top followers to spread the news. Previously, you may have only been able to tag one or two people depending on the text in your tweet.

How have you embraced the new Twitter character limit?