Literary icon and civil rights activist Maya Angelou will be forever remembered for her wit and interminable insight. It is her words that have inspired many to look within themselves for happiness and to not measure success through monetary gain.

Faced at an early age with racial discrimination, Dr. Angelou adapted and persevered with an unshakable faith in herself, forming bonds with such consequential political activists as Malcolm X and Martin Luther King, Jr. In 1970, Dr. Angelou published her internationally acclaimed novel, I Know Why the Caged Bird Sings, and two years later, she received a Pulitzer Prize nomination for her script, Georgia, Georgia.  Maya Angelou’s astounding achievements – both in literature and civil influence – cannot be wholly captured in an article, so as tribute to Dr. Angelou we look to her words for comfort, guidance, and unfailing wisdom:

“If you don’t like something, change it. If you can’t change it, change your attitude. Don’t complain.”

“Courage is the most important of all the virtues because without courage, you can’t practice any other virtue consistently.”

“My mission in life is not merely to survive, but to thrive; and to do so with some passion, some compassion, some humor, and some style.” 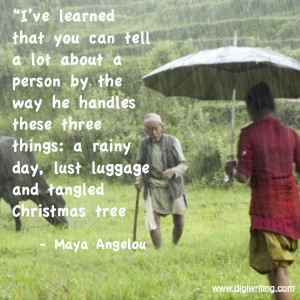 “It’s one of the greatest gifts you can give yourself, to forgive. Forgive everybody.”

“I do not trust people who don’t love themselves and yet tell me, ‘I love you.’ There is an African saying which is: Be careful when a naked person offers you a shirt.”

“Nothing will work unless you do.”

“We delight in the beauty of the butterfly, but rarely admit the changes it has gone through to achieve that beauty.”

“I’ve learned that you can tell a lot about a person by the way (s)he handles these three things: a rainy day, lost luggage, and tangled Christmas tree lights.”

What is your favourite Maya Angelou quote?