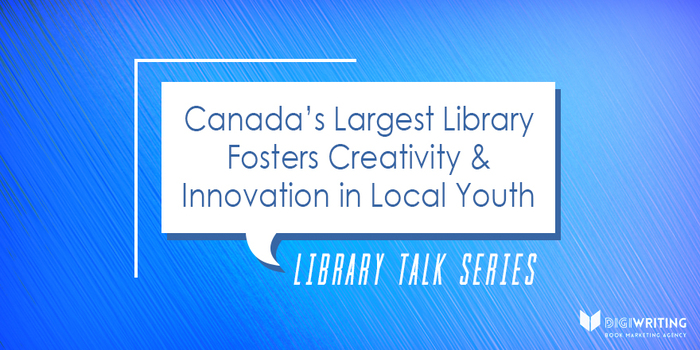 Helena Dong, Senior Youth Services Specialist at the Toronto Public Library, highlights some of the most popular, creative, and innovative programs the library offers for local Toronto youth. From musical instrument lending to digital innovation labs to their own publication featuring youth writing, Canada’s largest library system has specialized programming for youth at nearly every branch – 100, to be exact!

The Toronto Public Library offers a wide range of programs for youth interested in exploring their creativity, developing related skills, and sharing their talents and interests. These programs respond to current youth interests in writing, publishing, art, spoken word, comics, music, dance, and digital media. At these programs, youth meet peers who share their interests and adult practitioners who share their expertise.

Youth interested in writing will want to know about Young Voices, the library’s magazine of youth writing and art. Started in 1965, Young Voices is published every fall and showcases the creativity of Toronto youth. The deadline for submissions to be considered for this year’s magazine is April 4th. However, submissions are accepted after this date and will be considered for the following year’s publication. Entries are reviewed and selected by an editorial team of youth writers and artists working with professional writers and artists.

The annual full-day Young Voices Writers Conference will be held on October 28th this year after the Young Voices magazine launches on October 18th. The conference is open to all youth and offers a diverse suite of workshops that explore screenwriting, song writing, poetry, and graphic novels. Complementary workshops are offered during other parts of the year including at March Break and over the summer. In late July, poet Sachiko Murakami will lead a four-part series on poetry writing at the Toronto Reference Library. Giller Prize nominee Craig Davidson will lead a workshop at the Brentwood library, and comic artist Jason Loo will lead workshops at Albion and S. Walter Stewart libraries. Details will be posted later this spring on the library’s program listings site.

Youth interested in spoken word poetry are encouraged to check out Poetry Saved Our Lives. Offered at the Maria A. Shchuka, McGregor Park, Jane/Sheppard, Fairview, and Jane/Dundas libraries over the spring, this series is led by the city’s finest spoken word champions including Ian Keteku, Randell Adjei, Lishai Peel, and Patrick de Belen.

Shakespeare Hip Hop Fusion is another series for youth interested in expressing themselves through performance-based storytelling. Bringing the works of Shakespeare and hip hop music together, youth will be mentored by professionals to create a multi-media performance piece. This series is offered weekly for six weeks beginning on May 3rd at the York Woods library.

Youth interested in music will want to know about the Make Some Noise series. This series connects youth to the city’s vibrant local music scene with concerts and workshops. Youth (18+ or through a parent/guardian) might also be interested in the Sun Life Financial Musical Instrument Lending Library located at the Parkdale library.

For youth interested in digital media and maker culture, the library offers a range of tech and maker programs including workshops on coding, 3D printing, VR, Arduino, DJing, and podcasting. Youth might also want to check out the library’s Digital Innovation Hubs which offer 3D printers, digital design workstations, and recording studios as well as training. They are located at the Toronto Reference Library, Fort York, and Scarborough Civic Centre libraries. If they can’t make it to the Digital Innovation Hubs, youth can also check out the Pop-Up Learning Labs at various library branches as well as Youth Hubs at Cedarbrae, Centennial, Fairview, Maria A. Shchuka, Sanderson, and York Woods for similar equipment and programming.

There is plenty to do at the Toronto Public Library for youth. Our programs spark creativity and support youth in exploring their talents and interests. They incorporate new and emerging technology and help build connections between youth and the larger community of writers, artists, and makers in our vibrant city.

What is your favourite youth program at the Toronto Public Library?