In Praise Of Independent Bookstores 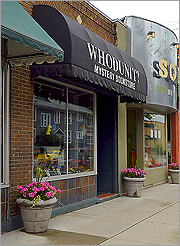 The Introduction To Books

“You’re going to encounter other people who work there or who will be there by chance who might have different experiences than you do. I think that’s a healthy thing for our society to interact with and make friends with people who have different ideas than what we do.”

The above quote is from photographer Bryan David Griffith, featured in the Slate article, Why Independent Bookstores Are More Than Just Places to Buy Books. Griffith embarked on a yearlong project covering more than twenty independent bookstores in the United States, from Bookbug, a newly opened children’s bookstore in Kalamazoo, Michigan, to the well-known City Lights in San Francisco. We wanted to highlight this project as independent bookstores go the extra mile to promote authors, and we value their commitment.

Here in Canada, we are blessed with many independent bookstores, even in larger cities in Atlantic, Eastern, and Western provinces, from the Bookshelf Cafe in Guelph to The Bookmark in Charlottetown. We even have bookstores specializing in topic areas such as Open Air Books & Maps, a travel bookstore in Toronto, the Whodunit Mystery Bookstore in Winnipeg, and Woozles in Halifax, Canada’s oldest independently owned children’s bookstore.

While we still have independent bookstores with dedicated customers, we did see the closing of iconic independents in 2014 and wanted to pay tribute to them:

Griffith views bookstores as “a meeting place away from the often segregated, homogenous world of social media.” And it’s the independent bookstores that are the champions of the indie literary scene, supporting local authors and small publishing houses. The Bookshelf Cafe, for example, holds a “Writing Room” on Monday mornings from 9 to 12, and the Whodunit Mystery Bookstore hosts a Writers Group on the third Wednesday of every month.