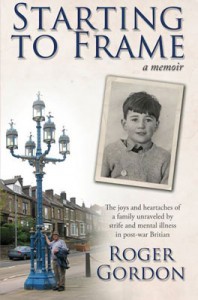 We’ve been thrilled to work with Dr. Roger Gordon, former Dean of Science at the University of Prince Edward Island, on his memoir Starting to Frame. Starting to Frame is the page-turning tale of Roger Gordon’s life, which was successfully launched on Friday November 14, 2014 at the Haviland Club in Charlottetown, PEI.

Though Roger recalls his early childhood as a happy one, as he grew older, things changed. His mother and father argued violently, and cohesiveness within the family broke down. The precise role that mental illness may have played in the domestic scene cannot be determined, because it was only after the marriage broke up that each of his parents were diagnosed with forms of it. As a young adult, Roger started to suffer from his own bouts of depression.

Not only was Roger faced with living with the ’60’s stigma of divorce, but this conflict resulted in him having a strained relationship with both of his parents. He immigrated to Canada as a young adult and embarked on a professional career as an academic, raising his own family. Throughout most of Roger’s adult life, he remained estranged from each of his parents. Eventually, he discovered that reconciliation and forgiveness, rather than prolonged resentment, provided the healing that he was seeking.

As mental illness is a reoccurring theme in Starting To Frame, Roger will be donating up to 50% of the royalties to the Canadian Mental Health Association and Mental Health Foundation (UK).

Listen to Roger’s interview with CBC Mainstreet’s Karen Mair to learn more about the book and to hear Roger read a passage.

Starting to Frame is available at amazon.com and smashwords.com or by visiting StartingToFrame.com

What is your favourite memoir?