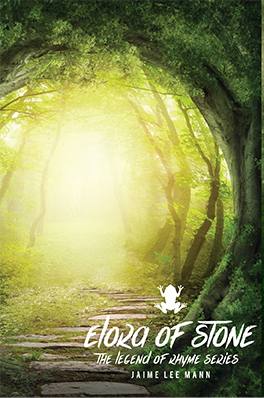 Ghostwriter Releases First Novel With Own Name On The Cover

We have thoroughly enjoyed working with Prince Edward Island ghostwriter-turned-author Jaime Lee Mann and are excited to be launching the first book she has written under her own name. Elora of Stone is the premiere novel in the “Legend of Rhyme” middle-grade fantasy series, with the next two installments expected to be released early in the new year.

Elora of Stone is a fantasy novel full of magic and adventure. Four-year-old Asher Caine disappears one day while playing with his twin sister, Ariana. In the Kingdom of Falmoor, all twins are cursed. Since the day the evil sorcerer Larque turned the good witch Elora to stone, all twins in this magical land have been fated to be separated.
Now approaching her thirteenth birthday, Ariana learns that her brother is alive and hidden. With their magical blood and mighty bond, the Caine twins are the only ones able to release Elora and rescue Falmoor from darkness. Joined by a host of magical creatures such as pixies, fairies, goblins, and ogres, Ariana and Asher must stop Larque and save their home.

Jaime Lee Mann lives on Prince Edward Island, where she works as a freelance ghostwriter. Elora of Stone started out as a story for Jaime’s two daughters, and quickly grew from there. Jaime explains that, “Because I have a nine-year-old and a seven-year-old myself, I’ve noticed a bit of a lack in titles that appeal to both genders, and that feature really good story-telling. So I decided to write a fairy tale that I would have enjoyed reading as a child.” Jaime writes every day, and is currently working on the next two instalments in the “Legend of Rhyme” series.

Elora of Stone is currently available for purchase on Amazon and booksellers can purchase print copies via Ingram.

What is your favourite fantasy series?