Skip to content
Home/Writing Tips/Twelve Lessons on Writing Fiction: The Essentials in Developing Your Novel (Part IX)
Previous Next 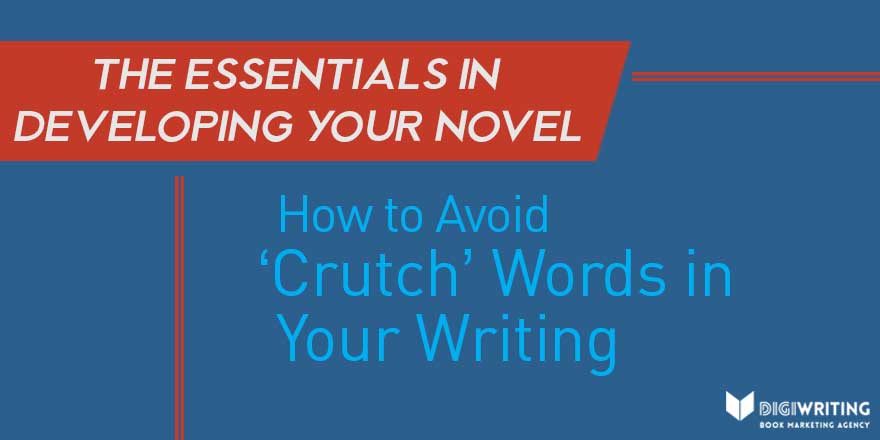 How to Avoid ‘Crutch’ Words in Your Writing

In part nine of this twelve-part blog series, founder of Books from Start to Finish Graham Schofield shares his thoughts on the words you should avoid if you want sharp, clean text.

In part ten in the series, Graham will look at self-editing.

If you missed part eight, Graham discussed how to create an attention-grabbing backstory for readers.

When I first attempted to write, I must have been one of the world’s worst “overwrites,” a term I’ve come to use often when coaching. When first writing, we have it in our heads that we must explain everything, so readers will get what we are seeking to tell them, using fifty words when twenty will do.

Then we learn to sharpen things, taking out extraneous text and getting to the point in a better way, but we miss problems that are harder to spot. Look at this:

Nancy was sure that she’d put it in her suitcase. She’d really tried hard to remember all the things that she needed and was sure she’d actually put it in. Now she was very angry with herself and literally threw the suitcase on the floor. Honestly, how stupid could she have been?

Can you see the problems?

Nancy was sure that she’d put it in her suitcase. She’d really tried hard to remember all the things that she needed and was sure she’d actually put it in. Now she was very angry furious with herself and literally threw the suitcase on the floor. Honestly, how stupid could she have been?

Don’t Write As You Speak

The problem is those highlighted words—I nearly wrote “is that those words”—are ones we tend to use in conversation—how we would describe the scene if we were Nancy—and they end up on the page when we write. We’re comfortable using them in our everyday language, and they become part of us. How often do you see “literally” in Facebook posts?

While we might miss these words, they are obvious to our readers because they spoil our writing. Readers pick up on them after the first few instances and the bad words hit them between the eyes every time thereafter. They can even make people give up on a book because it’s too annoying.

Let’s look at a few more we should avoid:

There are more words I could list, but rather than doing that, I’ll say there is much advice on the internet on such matters. Check out Vivien Reis’ excellent video on YouTube: 29 Words to Cut from Your Novel.

If you notice such words appearing in your text, then you need to think about how much you need them, and the question to ask is whether or not you would convey the same meaning if you deleted them. It could well be that you’re better off retaining them, but generally it’s time to backspace.

I used to be—still am, as suggested above—a “that” addict, and I adapted the advice of Mark Twain for my own editing; he didn’t have MS Word’s find and replace in his day:

“Substitute ‘damn’ every time you’re inclined to write ‘very’; your editor will delete it and the writing will be just as it should be.”

No one says it better:

But what does he mean?

In his highly recommended book, On Writing, King refers to the redundancy of adverbs, but what I dislike about them most is that they often make our writing lazy and more tell than show. We’ve addressed the need to obliterate really, actually, and suddenly, but what else needs to go?

I’d say adverbs can have a place in your text, but not when you write such as:

“I can’t believe he did that,” said Joan angrily.

“I can’t believe he did that,” said Joan as she threw her plate into the sink.

“We mustn’t be disturbed,” he said as he closed the window carefully.

What does the adverb add here? I’d suggest nothing, because you can either close a window or not. Do you understand precisely what I mean?

Have you found a pet crutch word and found a way to stop yourself using it? We’d love to hear your thoughts.