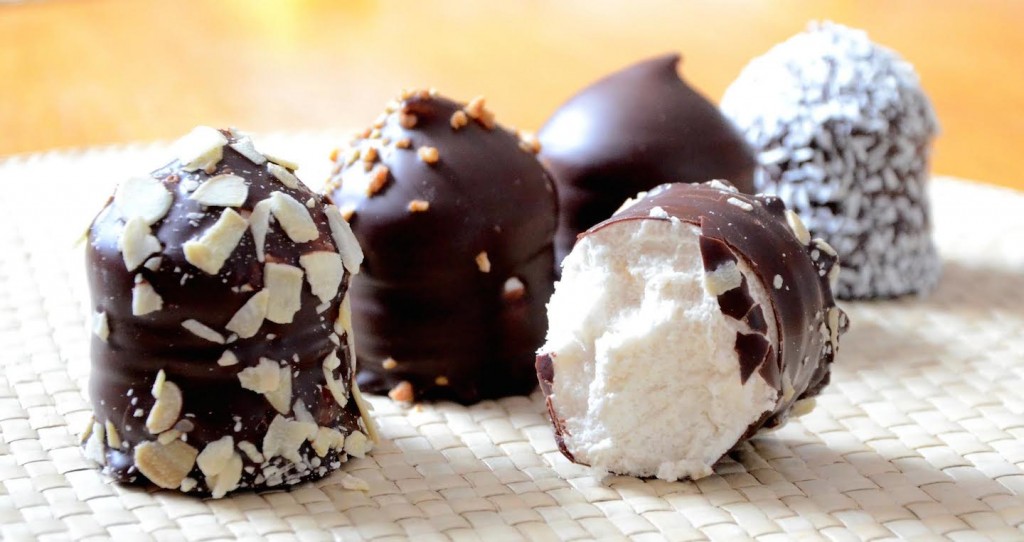 What Candy Can Teach Us About Self Control

During the fall of 2014 I authored a fifteen-part blog entitled Discovering the Greatness in Smallness: 15 Qualities of Great Short Story Writers for DigiWriting. I am pleased to continue guest posts for DigiWriting by writing a monthly column entitled Literary Insights in which I will share insights about contemporary literature, including both fiction and non-fiction. Each column will include a “Writers’ Notes” section that will suggest ways in which writers can apply these insights to their writing process.

I am a semi-retired freelance writer, editor, and researcher who lives in Dunedin, FL. I am an active volunteer in literacy, dog rescue, and dog therapy activities. My blog, Short Story Insights, offers reviews, information, insights, and resources on short stories.

Imagine yourself at the age of four, sitting alone at a table in a small room. A grownup places a marshmallow (or similar treat) on a plate in front of you and tells you she needs to leave for a few minutes. If you wait until she returns, she explains, you may have two marshmallows. If not, you may only have the one in front of you. Then she leaves the room. What do you do? Devour the marshmallow immediately or delay your gratification in hopes of being rewarded with two?

I’ve been intrigued by the Marshmallow Test since I read about the research project and watched those adorable preschool kids  poke, sniff, drop, roll, smash, and lick marshmallows while inventing ways to avoid eating the forbidden fruit. The original research, and many variations of it, has been ongoing for the past half-century and producing fascinating results.

The Marshmallow Test: Mastering Self Control

The Marshmallow Test: Mastering Self Control by Walter Mischel (Little Brown and Company, 2014) was written for people like me — non-scientists interested in psychology and education who want to know more without trying to wade through detailed research studies. This very readable book is a combination of science (Mischel’s research and related research on self-control is summarized in everyday language), memoir (Mischel admits his own impatience has driven his research on self-control for the past half-century), and guidance (ideas are provided for anyone wanting to improve self-control). 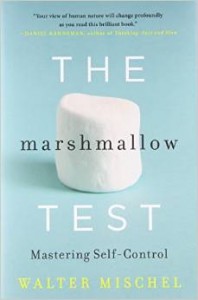 During the 1960s and 70s, Mischel, then a psychologist at Stanford University, began a series of simple but effective “marshmallow” experiments involving preschool children ages four and five. While some children devoured the marshmallow the minute the researcher left, others created ways to successfully distract themselves in order to earn the reward of two marshmallows.

In follow-up studies, some totally unexpected but highly significant results were discovered. The children who were able to wait for the reward of two marshmallows scored as much as two hundred and ten points higher on S.A.T. tests during adolescence and had better social skills and more friendships than those who ate the marshmallow immediately. In adulthood these same children had a lower body mass, managed stress more effectively, stayed focused on goals, and demonstrated a more positive sense of self-worth than those who were unable to wait.

In an interview with the New Yorker, Mischel, now a psychologist at Columbia University, explained the intent of his research. “What we’re really measuring with the marshmallows isn’t will power or self-control,” he said. “It’s much more important than that. This task forces kids to find a way to make the situation work for them. They want the second marshmallow, but how can they get it? We can’t control the world, but we can control how we think about it,” he explains in the article.

How To Resist The Marshmallow

The children who focused on the marshmallow in front of them almost invariably ate it. The children who were successful in delaying their gratification relieved the unpleasantness of waiting by inventing imaginative, fun distractions that drew their attention away from the tempting marshmallow: they covered their eyes, sang songs, talked to themselves about waiting, made funny faces, picked their noses, cleaned their ear canals, pulled their pigtails, and created games with their hands and feet. One even took a short nap.

The ability to delay gratification is an acquired cognitive skill, Mischel contends, that is measurable at an early age and has long-term consequences for people’s mental and physical wellbeing from preschool through retirement. The implications of his ongoing research are broad: “rethinking who we are; what we can be; how our minds work; how we can — and can’t — control our impulses, emotions, and dispositions; how we can change; and how we can raise and educate our children.” (p. 5)

During World War II a bombardier and pilot whose B-24 crashed in the Pacific Ocean were able to stay alive under the most adverse circumstances imaginable using their creative cognitive skills. Louis Zamperini and Phil Phillips were able to survive for forty-seven days adrift on a raft because they passed their own wartime version of the marshmallow test. In Unbroken, Laura Hillenbrand describes how the two men constantly peppered each other with questions to exercise their minds, sang “White Christmas” while sharks circled their raft, and planned their futures in hopeful, minute detail to protect themselves from deep despair.

Naturally, their thoughts turned to food. Each day Zamperini and Phillips prepared elaborate meals in their minds: “sauces simmered, spices were pinched, butter melted on tongues.” (p. 209) And when they finished “cooking,” the men would describe each mouthful as they devoured their imaginary meals. Even though they knew their chances of survival were dismal and grew less likely with each passing day, these men were able to use their imaginations to divert their attention away from what they feared most.

Writing with the hope of being published may be the supreme “Marshmallow Test.” Gratification in the form of an acceptance letter rarely comes quickly. It takes a lot of patience, perseverance, and stubborn self-confidence to wait for that marshmallow. Dwelling on it is almost assuredly a perfect way to invite a chronic case of writer’s block. Distracting yourself by singing songs, picking your nose, taking naps, and writing because you love the process and can’t imagine your life without it may be the key to becoming a happy writer with an occasional marshmallow as a reward.

In the introduction to The Marshmallow Test, Mischel says that as he wrote the book he imagined himself having a “leisurely conversation” with readers who might casually inquire about his research. This approach makes the book very readable, particularly when he discusses topics such as genetics, DNA, and brain plasticity. Mischel’s practical application of his research to real-life situations such as controlling weight, quitting smoking, raising children, reforming education, and understanding our weaknesses and strengths are interesting and give us all hope that we can make use of “marshmallows” to improve our lives and the education of the children who are our future.

How do you deal with “marshmallows” in your own life?