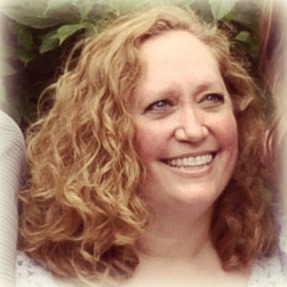 What is your favourite book of all time? How has it influenced you and your writing?

My first novel, The Color of Thunder, was written over a very long period of time. I had the beginning and middle written before I was married. The book got put on hold when my husband and I started our family, and wasn’t picked up again until our oldest child was twelve. I always loved the idea of that book, and the heart of it stayed the same, but I rewrote the entire thing and gave it a different ending than I had previously planned. With Alabama Skye and the forthcoming A Skye Full of Stars, my approach was different. I wrote detailed outlines for both and knew, for the most part, what was going to happen. Details change as I write. The characters have an uncanny way of telling their own stories. I have been surprised by them many times.

A little bit of both. In my first novel, The Color of Thunder, I wrote about Jackson, Mississippi. The story starts in 1946, which was more than thirty years before I was born. I had to do a lot of planning for that novel to make sure things were historically accurate, but I had the personal world of my characters well imagined before I ever sat down to write. In The Gannon Family Series, specifically the second book, A Skye Full of Stars, a large part of the story is about World War II. The catch to that is that it takes place in Scotland and not in the US. A great deal of time was spent researching my facts so I could create a realistic world for my characters. I start with a good foundation of both imagination and research, and keep building on both as I write.

I keep track of my daily or weekly writing progress by watching my word count stack up, and I have a generalized total I like to shoot for when it comes to a completed novel, but I can rarely predict just how many words a story will take to tell.

I would say the biggest challenge I’ve faced while writing is all of the relocating we’ve done since I began. The Color of Thunder was written in two different states and in two different countries! It was much the same for Alabama Skye. I’ve gotten rather skilled at writing wherever I can, whenever I can.

J.C. Wing is a Colorado native but has lived in both North Carolina as well as southwest Germany. Her debut novel, The Color of Thunder, was published in 2012. Alabama Skye, the first in a trilogy called The Gannon Family Series, was published in June, 2014. A Skye Full of Stars will be released in the summer of 2015, and the third book, Beneath a Southern Skye, will follow soon after.

What is your favourite book of all time?