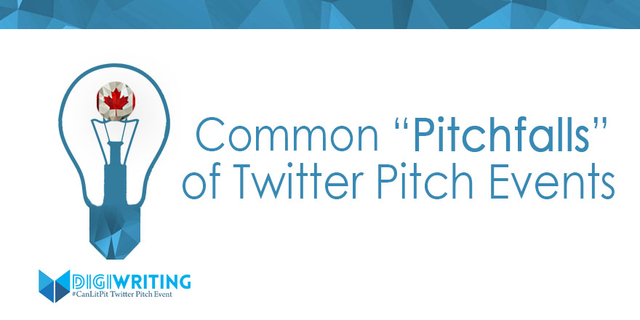 5 Mistakes to Avoid When Participating in Twitter Pitch Events

The saying “I wrote you a long letter because I didn’t have time to write you a short one” wasn’t written about Twitter pitches, but it might as well have been. The successful Twitter pitch packs compelling conflict into a microscopic space. Authors often get stuck on trying to express the whole spirit of their manuscript in 140 (or fewer) characters. Rather than being a micro-summary, the Twitter pitch is a specific kind of marketing document that seeks to position the manuscript and hook an editor or agent.

I’ve helped out with pitch parties as a volunteer editor; I also work as an editorial reader for an agent, and have read the queries that come in as a result of Twitter pitch contests. To help aspiring #CanLitPit authors refine their pitches, I’ve outlined some common mistakes I see in pitches and how to avoid them.

Authors frequently withhold important details from their pitches, in an effort to avoid spoiling their manuscripts. The result is a pitch that sounds flat and is often vague. While your pitch shouldn’t give away key spoilers, sometimes revealing a twist is necessary to express what makes your manuscript unique.

I’ve put together an example using the thriller GONE GIRL; while it’s not CanLit, it’s well-known and has some very prominent twists. Consider:

Amy’s disappearance makes husband Nick a murder suspect. He must uncover the truth about both of them to clear his name #CanLitPit #A

Nick was gruesomely framed for the murder of his wife Amy. Thing is, she’s still alive. And she’s the one who set him up. #CanLitPit #A

The first pitch gives us the central premise of the story and hints at possible conflicts and stakes; it sounds very much like a conventional thriller/murder mystery. In that sense, it’s accurate, but it fails to really capture the spirit of GONE GIRL. The drive of GONE GIRL is Amy’s monstrosity, and the complex, awful relationship she has with Nick. By spoiling the plot a little, the second pitch gives the reader a much clearer picture of the psychodrama and interpersonal conflict that make GONE GIRL what it is.

This is not the time to demonstrate your superior command of English vocabulary or your love of complex sentence structure. It’s also not particularly confidence-inspiring: if a highly restricted Twitter pitch is wordy, the manuscript is likely to need heavy line editing. Keeping your language spare will make your pitch punchier, and will allow you to express more relevant information in a short form.

Amy’s disappearance makes husband Nick a murder suspect. He will have to uncover the truth about both of them to clear his name. #CanLitPit #A

Nick is being gruesomely framed for the murder of his wife Amy. Thing is, she’s still alive. And she’s the one who is setting him up. #CanLitPit #A

These extra words eat up characters and make the pitch drag. The extra padding of these verb constructions softens the language of the pitch. The extra words also mean it will be more difficult to squeeze in the necessary hashtags.

Keep a close eye out for for extra conjunctions, passive voice, and perfect and progressive forms (“had

[verb]ed” and “were[verb]-ing” constructions, respectively). While it’s possible to get away with some stylistic quirks in prose, a Twitter pitch is simply too short.

At this stage, the title of your manuscript is only prospective; the agent or publisher might recommend changing it later. Titles eat up precious characters and are not essential to the story. Including the title doesn’t tell the reader about the meat of the story. A better use of characters would be to set up some of the conflict or stakes. Even getting really specific with your category and genre hashtags would be more helpful to agents and publishers than the title, because it allows them to see how your work might fit into their list.

Frequently, authors will get hung up on trying to express many interesting aspects of the manuscript at once. The result is a pitch that’s hard to read and harder to understand. Pick one or two points of your manuscript to highlight.

Here’s an example using one of the GONE GIRL pitches:

Amy’s disappearance makes husband Nick a murder suspect. He must uncover the truth about both of them to clear his name

While the diary is important to the narrative structure of GONE GIRL, including it in the pitch bogs it down with detail it doesn’t need. The result is that the pitch tries to pack too much information into 140 characters, and the sentence becomes awkward.

Twitter pitching is such a delicate balance that it seems necessary to use all 140 characters. But proper tagging increases your chance of getting your pitch in front of someone who’s looking for work like yours. Publishers and agents usually have specific genre and category interests and will prioritize reading their preferred tags over the general #CanLitPit stream. So remember to reserve characters not just for the mandatory #CanLitPit tag, but for category and genre tags.

If you’re a marginalized author, tags like #ownvoices and #DiverseCanLit can also be helpful–many agents and publishers are actively looking to diversify their lists, and flagging your pitch can help you get noticed.

About: Julie Sadler is a freelance editor and author coach based in Toronto. She’s helped many emerging writers through the editing and query process and knows her way around a pitch contest. You can find her online at fembotpoetics.com or on Twitter at @julie_francess.