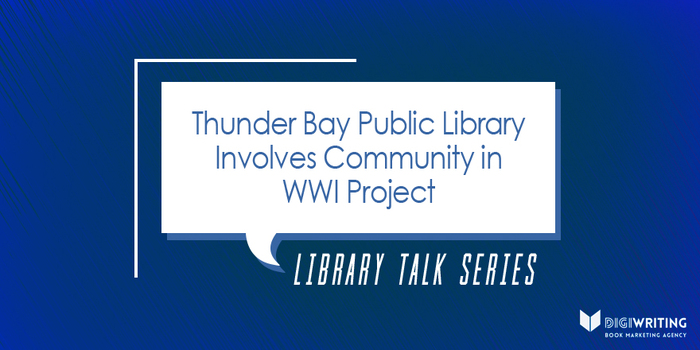 It’s easy to forget that, in addition to their role as a community hub, local libraries also act as a “museum” of the community in which they are located. Your local library is likely stocked full of historical documents including old maps, photographs, census data, and more. In this month’s Library Talk blog, Jesse Roberts from Thunder Bay Public Library writes about their massive World War One Thunder Bay Centennial Project and how many community partners are working with the library to acknowledge and pay tribute to the role played in the First World War by local citizens.

The World War One Thunder Bay Centennial Project has a very long title and an even longer set of goals. The purpose of this work is to commemorate and highlight the impact and influence that the First World War had on the former cities of Fort William and Port Arthur (which amalgamated in 1970 to form Thunder Bay). In 2013, staff at the Thunder Bay Public Library began working on a digital display to commemorate the First World War and its connections throughout Thunder Bay, Ontario. By early 2014, the project had expanded to include the City of Thunder Bay Archives, Northwestern Ontario Sports Hall of Fame, and the City of Thunder Bay Heritage Advisory Committee. Soon the project expanded even further and took on a life of its own. Today it features ten organizational and professional partners along with work from more than two dozen community contributors located across North America.

The project officially launched in November 2014 with a logo and a small amount of material available online. The entire project was, and still is, hosted via the Thunder Bay Public Library’s website at www.tbpl.ca/worldwarone. Anyone is welcome to visit the project online to delve into the research material available there that will be of interest to all historians. Partners are consistently working on building content for the project to ensure an ongoing set of new and interesting material that is largely based in municipal and media records. Members of the public have contributed photographs, letters, essays, and family stories to show the personal toll of the war and the ways in which it changed the landscape of the community.

Another component to the World War One Thunder Bay Centennial Project can be found on the Gateway to Northwestern Ontario History database (part of the OurOntario.ca portal). There you will find a featured collection made up of more than 5000 photographs, personal documents, newspaper records, and more—all of which are freely available to the public. Visitors to the database can also take advantage of the “Community Contributions” link to share their own stories related to the First World War or other topics of Northwestern Ontario historical interest.

Further work has been undertaken by the project in connection with the City of the Poppy Steering Committee, which was struck in 2015 to commemorate the First World War at a municipal level and highlights the position of a Thunder Bay hotel as the site where the Great War Veterans Association decided to make the poppy the official symbol of remembrance in July 1921. Each month, the local newspaper publishes an article about the First World War as written by a member of the committee. Most of this material is derived from or connected to the World War One Thunder Bay Centennial Project.

In addition to features in local media, the project has been showcased in the Winter 2016 Off the Record (Archives Association of Ontario), the Spring 2016 The Bulletin (Organization of Military Museums of Canada), and in a 2017 paper presented to the Archives Association of Ontario annual conference. The unprecedented level of organizational collaboration and partnership work has been a focus within the professional writings.

The future of the project maintains lofty goals, which include but are not limited to:

Have you ever used your local library to conduct research on your town?